The face of LMC wine

BARODA — Southwest Michigan’s first and only teaching winery and tasting room is ready for business, which Lake Michigan College envisions as the core of a major destination spot.

Lake Michigan Vintners officially opened Friday with a ribbon-cutting ceremony at 8972 First St. in downtown Baroda – where future winemakers will get hands-on experience on the art, business and science of the industry, LMC President Trevor Kubatzke said. “The program itself is actually very unique because it’s one of those deep programs that teaches students the entire supply chain, from planting a grape plant, to harvesting the grape, producing the wine, and now, to selling it,” Kubatzke said. “Our students get every single piece of the puzzle.”

LMC officials hope that Lake Michigan Vintners’ activities will jump-start economic activity in the area – and the business of winemaking can definitely play a part, Kubatzke said.

“As our program grows, and wine industry in this region grows, you’ll see great things, so stay with us,” he said. 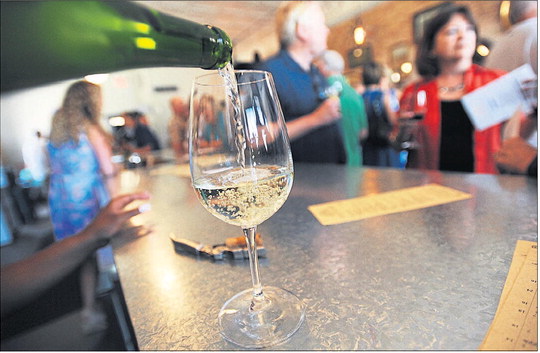 A server pours a glass of wine Friday during a ribbon cutting and open house held for Lake Michigan Vintners Tasting Room in downtown Baroda. The tasting room is part of Lake Michigan College’s Wine & Viticulture Technology program and is the Midwest’s only teaching winery.

“This is basically our second reinvention – we started out agricultural and switched to manufacturing. Everybody knows how manufacturing is – that the shops we have left are doing very well, but now, we’re transitioning again,” he said.

State Rep. Dave Pagel, R-Oronoko Township, seconded those sentiments, noting the changes that he and his family have seen as major agricultural producers.

“Probably the only constant over the years in fruit farming is change,” Pagel said. “There weren’t a lot of wineries around here when I was a kid, and this (situation) has changed so much.”

Friday’s opening marks a satisfying moment for the program, which began with a $1 million in state funds to help LMC start its Great Lakes Wine Institute, according to former state Rep. Al Pscholka. Pscholka, now state budget director, recalled his efforts to ensure a slot for the funding during his tenure as chairman of the Michigan House of Representatives’ Appropriations Committee. “We got in a meeting with the governor (Rick Snyder) ... he said, ‘What in the heck is the Great Lakes Wine Institute?’” Pscholka said. “I explained it to him – he’s kind of a foodie himself – and he said, ‘Absolutely, Al. Let’s put $1 million in there.’ That’s been a big help for this program. I was proud to do that, and this is going to be a tremendous success.”

Program Director Mike Moyer said Lake Michigan Vintners – with help from its brand manager, Laura Morris – will focus on promoting the area wine industry, and teaching students how to succeed in it.

“We are here to grow the industry, to demonstrate – in a glass – what is possible, here in Southwest Michigan,” he said.

LMC formed Lake Michigan Vintners as a nonprofit corporation, which will be run and managed by its own independent board, Moyer said.

“This is the really important part of the wine industry, is being able to tell the story, when you’re pouring the wine,” Moyer said. “If they can spend a summer with us doing that, they’re going to be well-prepared to go out into the real world, and start selling their own wine.”

The program has about 22 students, between those who have just graduated, and those who are getting ready to start, Moyer said.

Among them is Jimmy Lynch, formerly of Chicago, whose long-term goal is to run his own winery, or manage one. He’s finishing his program in a year.

He got a bachelor’s degree in criminology from St. Mary’s University in Minnesota – but wound up moving to Michigan City, Ind., after his original career choice didn’t agree with him.

“While I was earning my bachelor’s degree, during the summer, I would work at wineries in Southwest Michigan. That’s where I gained my interest in wine,” Lynch said. “Winemaking’s been a big hobby of mine, so I decided to make a career out of it.”

Second-year student Sherrie Williams, who lives near Buchanan, voiced a similar thought about leaving her former career as a zookeeper, in Michigan City.

For Williams, winemaking offered the chance to reset her life after attending college at Purdue North Central and Vincennes universities, but not finishing at either institution.

“I’ve always been a naturalist, until this program. I love wine, honestly. That’s the only reason. So I decided, that if I wanted to do something with my life, I needed to make a change,” she said. 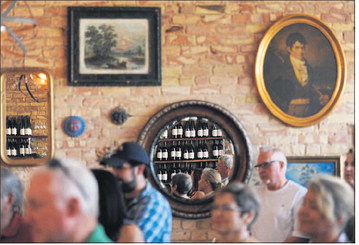 Bottles of wine are reflected in mirrors Friday during a ribbon cutting and open house held for Lake Michigan Vintners Tasting Room in downtown Baroda. 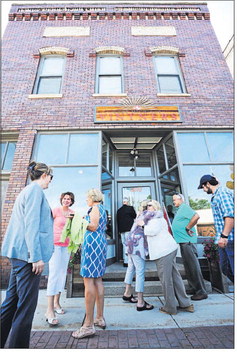 An open house is held Friday for Lake Michigan Vintners Tasting Room in downtown Baroda. The tasting room is part of Lake Michigan College’s Wine & Viticulture Technology program and is the Midwest’s only teaching winery.

Click here to see this page in the eEdition: