ST. JOSEPH — When Norma Tirado heard that her daughter’s band, the Madison, Wis.-based The Big Payback, was performing a musical revue that celebrates iconic women in music as a benefit show for Planned Parenthood, she wanted to create a similar concert in Southwest Michigan.

“We did this show with female singers from the area, and it was a real success, and my mom (who is board president of the Southwest Michigan Symphony Orchestra) heard about it, and she wanted to bring the concept to the symphony,” Leah Isabel Tirado says. “So she tried to find a local band to do something similar, but it’s a lot of work and my band had already done all the arrangements, so they decided to bring my band in from Wisconsin to do it with some wonderful singers from here.”

The concert highlights music written and performed by influential female artists from Aretha Franklin and Tina Turner to Dolly Parton and Joni Mitchell.

“I’m really excited because this is an amazing group of women, and I am very humbled to sing with such a great cast,” says Beth Haire-Lewis, who will perform three songs by Ella Fitzgerald. “I hope I can hang with these girls. ... What I didn’t know was that Ella Fitzgerald was married to bassist Ray Brown who actually played with my daddy for years. It was Gene Harris and the Ray Brown Trio. So I was really excited about doing this. I just hope I do justice to Ella.”

Haire-Lewis will sing the classics “Summertime,” “Dream A Little Dream of Me”and “Mack the Knife.”

Candice Elders, who admits she’s more comfortable on the karaoke stage at Babe’s Lounge, will be performing “All I Wanna Do,” “Soak Up The Sun” and “If It Makes You Happy” by Sheryl Crow.

“I’ve been in a few mediocre cover bands in my day and some musicals here and there,” Elders says. “But really what I think it is all about is supporting such a great organization. The symphony does so much good work around here. ... And it’s like just singing with friends. It’s so fun to honor these women and do it all together for a great cause.”

In addition to Haire-Lewis and Elders, Leah Tirado will sing the Tina Turner classics “What’s Love Got To Do With It,” “Proud Mary” and “River Deep, Mountain High”; Jule Laurent sings Gwen Stefani’s “Spiderwebs,” “Just a Girl” and “Don’t Speak”; Jenna Mammina sings Joni Mitchell’s “Big Yellow Taxi,” “Help Me” and “A Case of You”; Kim Pedersen sings Adele’s “Someone Like You,” “Hello” and “Right As Rain”; Deb Carew sings Dolly Parton’s “Nine to Five,” “Jolene” and “Baby I’m Burnin’”; Morgan Ingle sings Janis Joplin’s “Maybe,” “Move Over” and “Piece of My Heart”; Char Jones sings Aretha Franklin’s “Think,” “Baby I Love You” and “Natural Woman”; and Meredith George sings Alanis Morissette’s “You Learn,” “You Oughta Know” and “Ironic.”

All 10 vocalists will take the stage for the closer: Franklin’s classic “R-E-S-P-E-C-T.”

“It’s really just a tribute to these women who have had such a large impact on music and taking a moment to appreciate them,” Leah Tirado says. “It’s us honoring these women and their songs. Every single woman who is singing are movers and shakers in this community, whether they are professional singers or not. So in a way we are paying tribute to the women in this community as well.”

Click here to see this page in the eEdition: 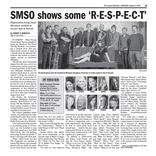